Red herrings: I quite like words, I like word play even more.
This is a re-visitation of an old project – in fact it was the project I set myself for my final year at university.

The source of my inspiration is the dictionary. I have been through my copy with a fine toothed comb and collected all the words I can find with the word ‘ring’ in it somewhere. Firing, remebering, enduring and hard-of-hearing are a few examples. I’m working on fabricating a range of words into rings to be worn. Check back for updates and to see how I have interpenetrated the words I choose.

Here are some that I have already created; 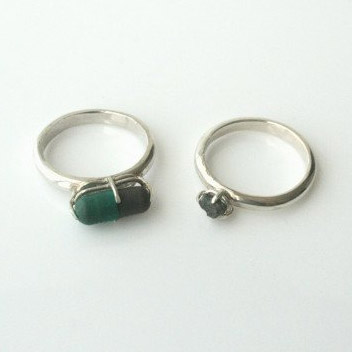 This ring has two names, because they both fit the story for this tongue in cheek creation. Mounted on the silver band is a very non-precious stone, in fact it was a part of the road up until the point that my boyfriend launched himself onto it from the seat of his motorbike. At this point the stone entered and injured his arm (and stayed there for longer than advisable).

The silver band has a scratched/damaged look – much like the motorbike did after said incident. 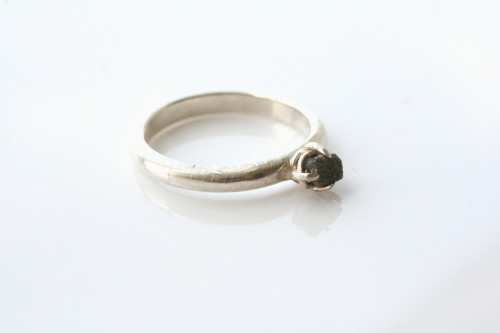 vb
1. to come or go into (a particular place) he entered the room,

vb (-juring, -jured)
1. to hurt physically or mentally,
2. to do wrong to (a person), esp. by an injustice, the injured party,
3. to damage, an opportunity to injure your reputation…*

As I mentioned above, the stone lingered, resulting in a minor hospital visit and a short course of antibiotics. Hence: recovering. And he is fine by the way! 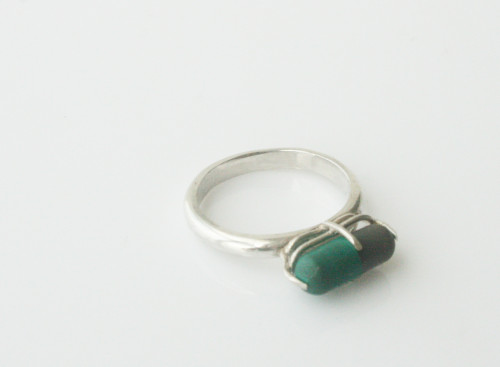 vb
1. (of a person) to regain health, spirits, or composure,
2. to regain a former and better condition…* 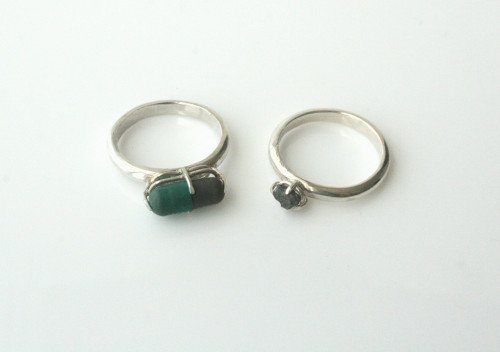 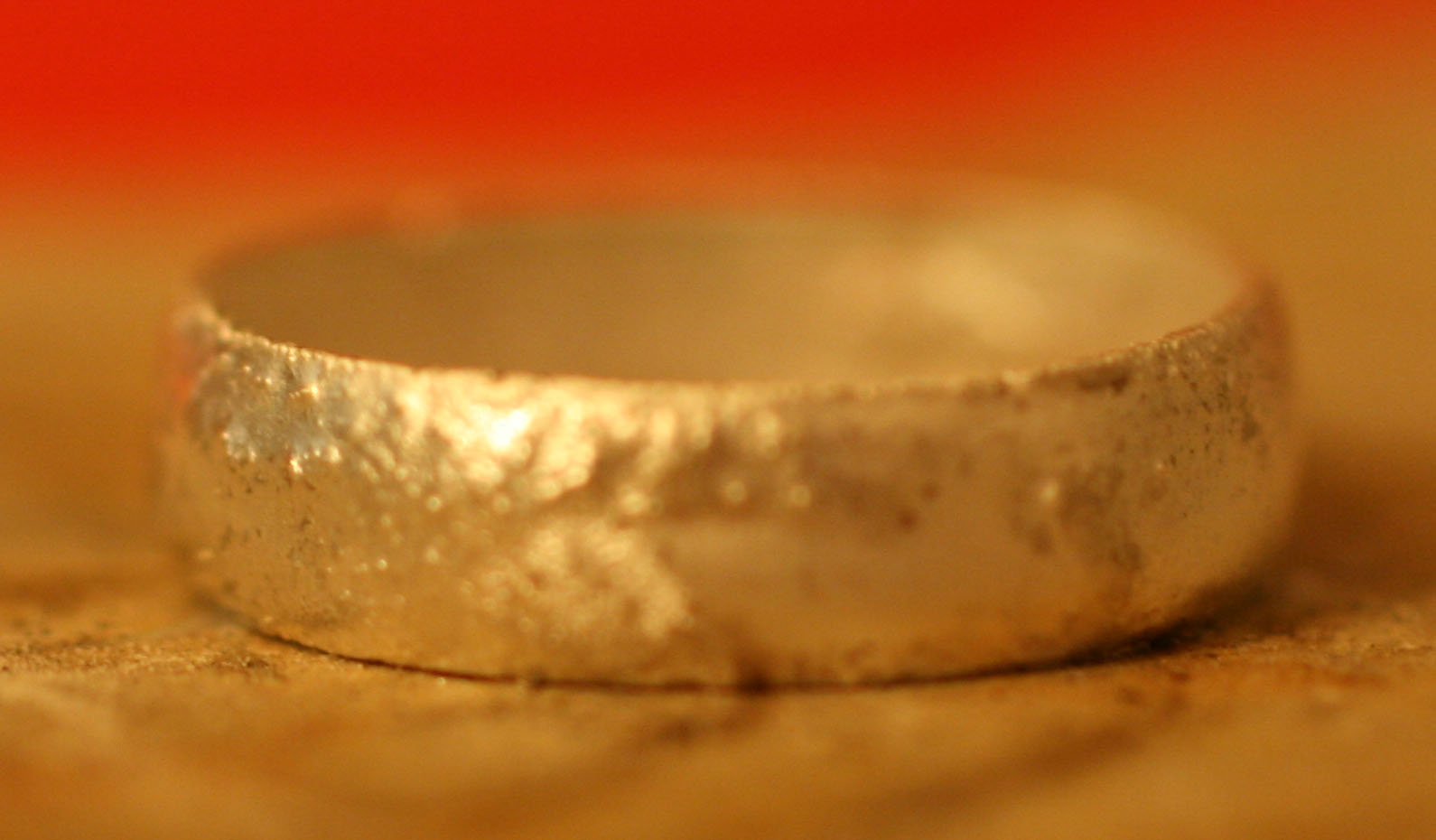 I’m itching to get a new workshop set up, but until then I have been playing about on my computer with some images. This is a new addition to my ‘Red HerRing’ collection. Meet FiRing. This very short animation (15seconds!) is made from a sequence of fast fire, still photographs using my camera firing cord, and a hefty chunk of time for this not so tech savvy silversmith! 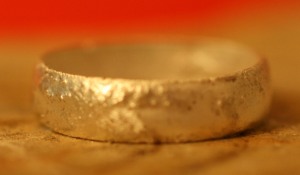 FiRing from Emily Alice on Vimeo. 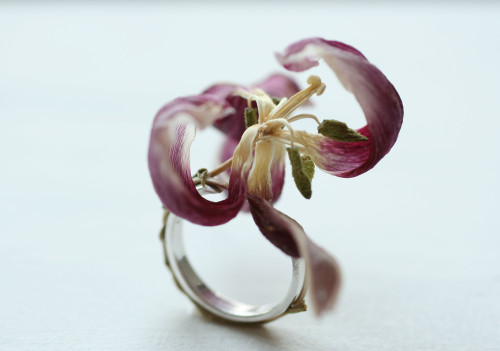 Nature did most of the work for me on this ring. Made from sterling silver, a tulip and a little time. Just conceptual really but it fits the description. 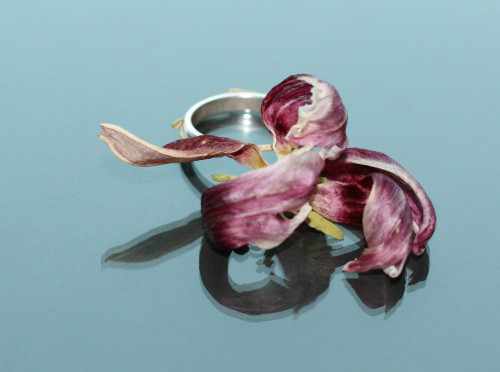 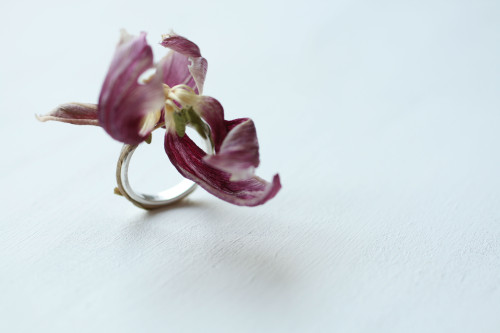 with·er
/?w?ð?r/
–verb (used without object)
1.
to shrivel; fade; decay: The grapes had withered on the vine.
2.
to lose the freshness of youth, as from age (often fol. by away ).
–verb (used with object)
3.
to make flaccid, shrunken, or dry, as from loss of moisture; cause to lose freshness, bloom, vigor, etc.: The drought withered the buds. 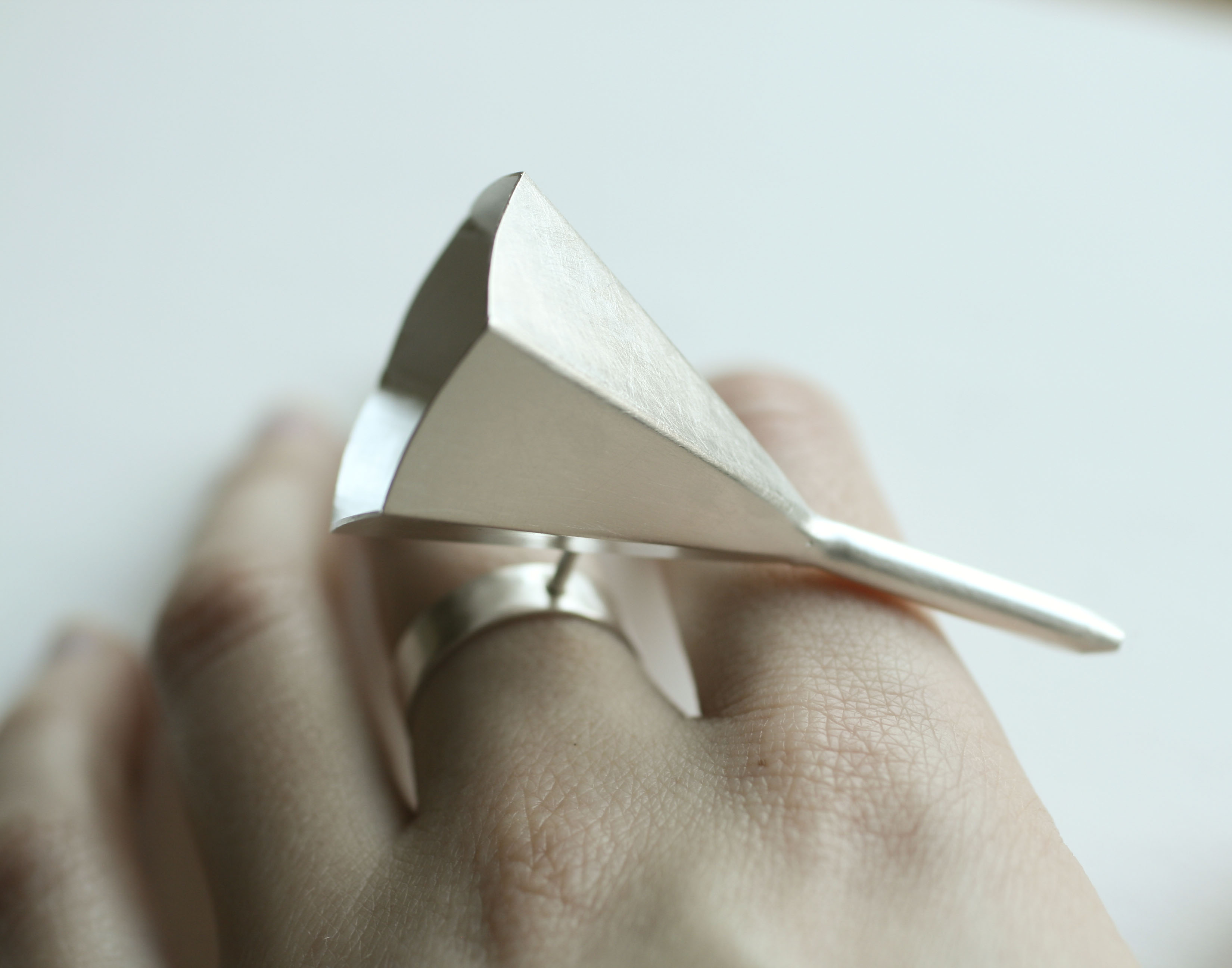 This silver ring is a handmade miniature ear trumpet mounted on a silver band. a) deaf or partly deaf

b) ( as collective noun; preceded by the ): the hard of hearing 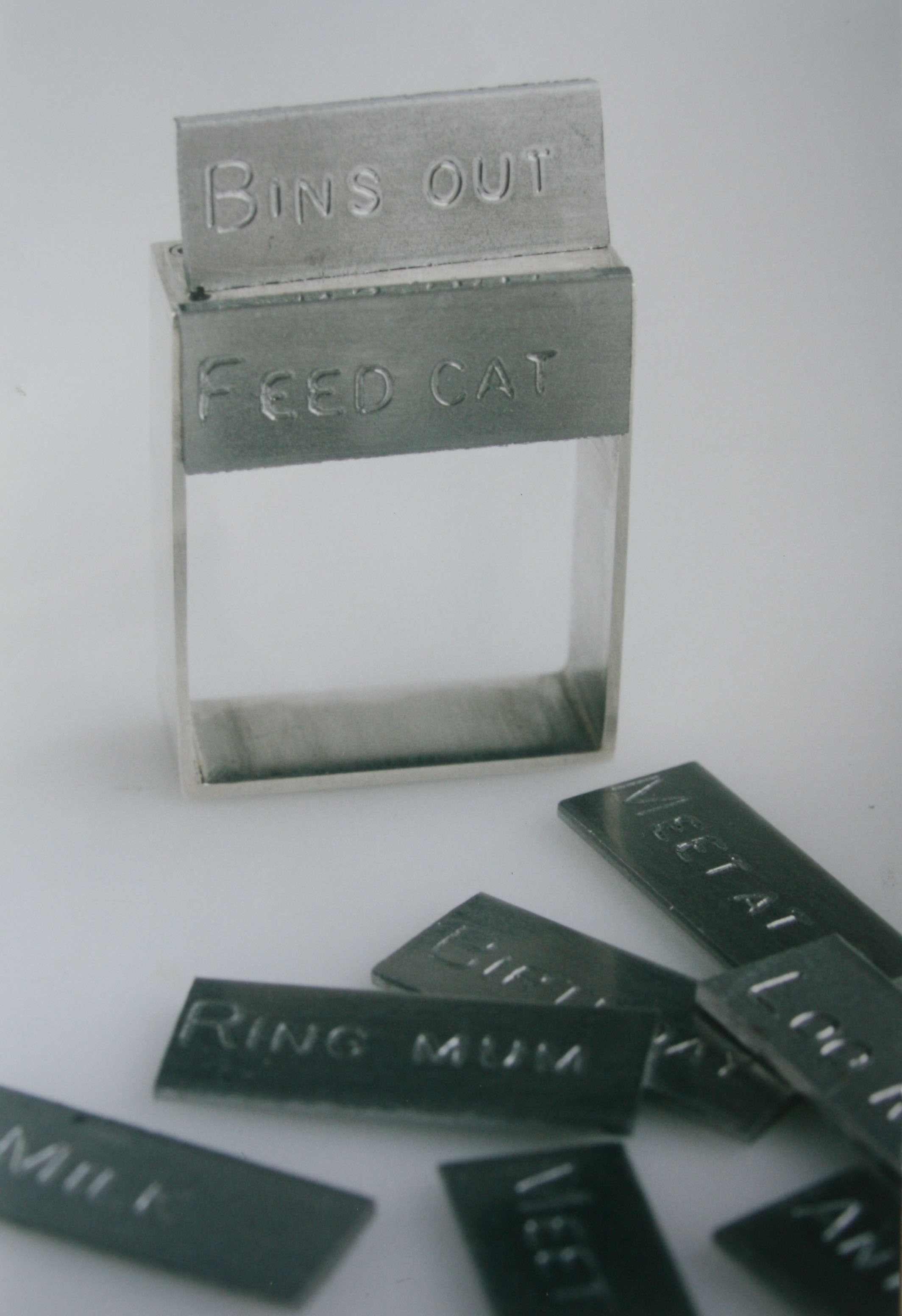 RemembeRing. This square ring is made from silver with magnets set inside the boxed top. Interchangeable steel faces have different messages for the wearer.

2 [with infinitive] do something that one has undertaken to do or that is necessary or advisable:did you remember to post the letters? 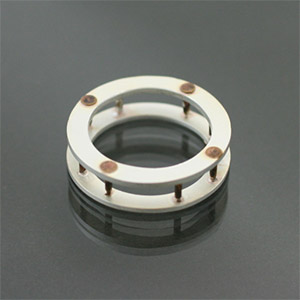 Each side of this ring is enduring the other. With an equal number of nails pushed through and pressing against the top and bottom of the ring it really is a test of endurance. The two ring parts are made from sterling silver and the nails are made from copper. In this image I left the nails with an oxidized finish. I like the balance of the clean white silver, and the rusty looking nails that must be endured. 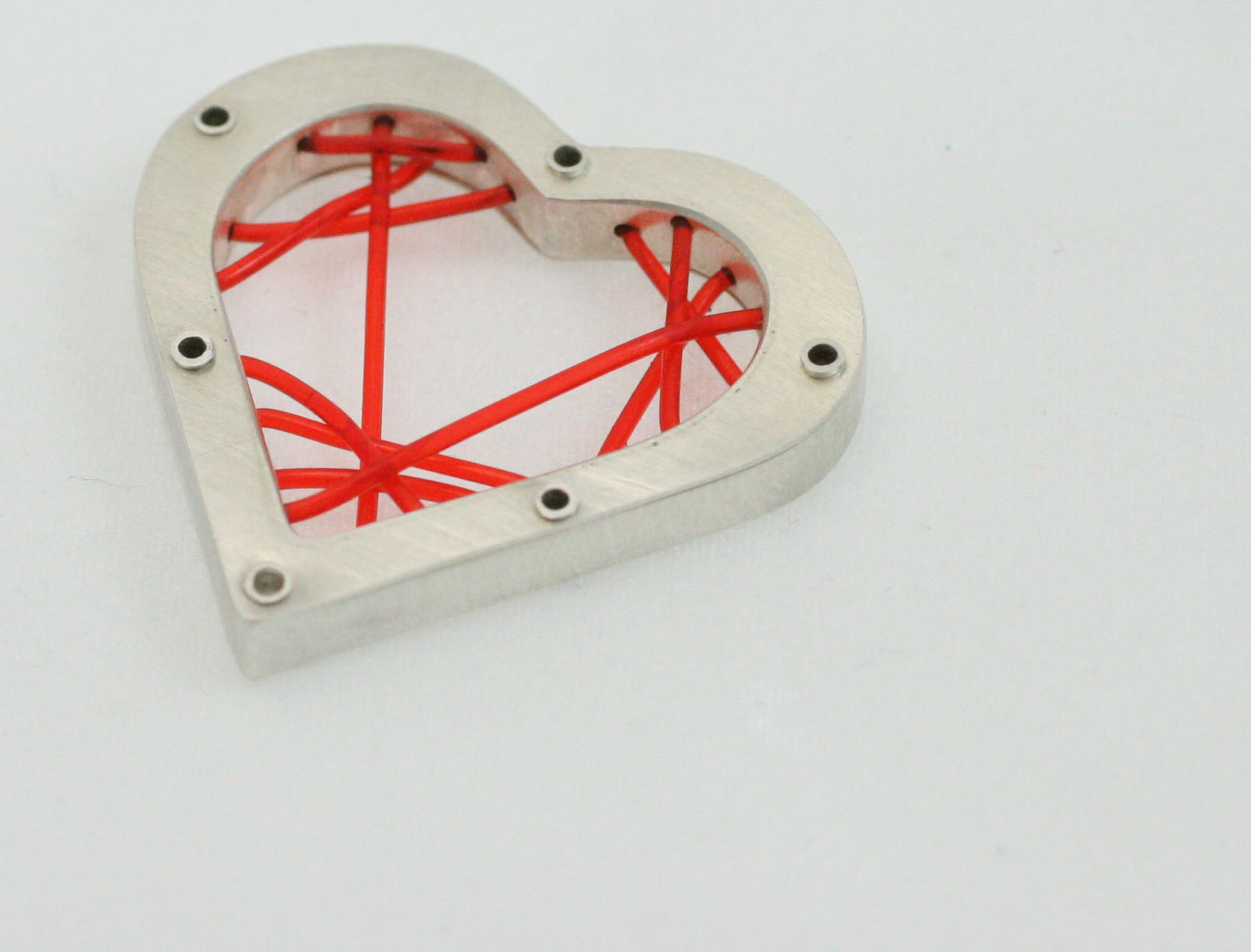 Heartstrings is a unusually shaped ring, with red strings running through the center. The heart shaped case is made from sterling silver and riveted together, the strings are made from a firm but elastic silicon cord. 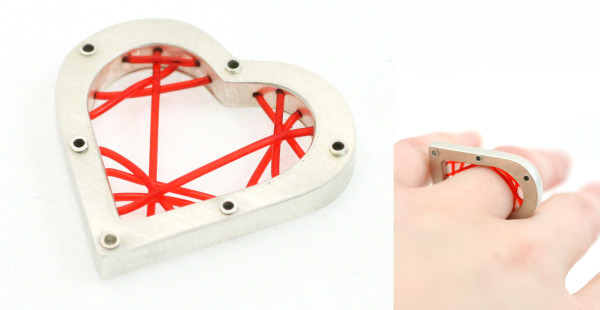 heart·string (härtstrng)
n.
1. heartstrings The deepest feelings or affections: a tug at the heartstrings.
2. One of the nerves or tendons formerly believed to brace and sustain the heart. 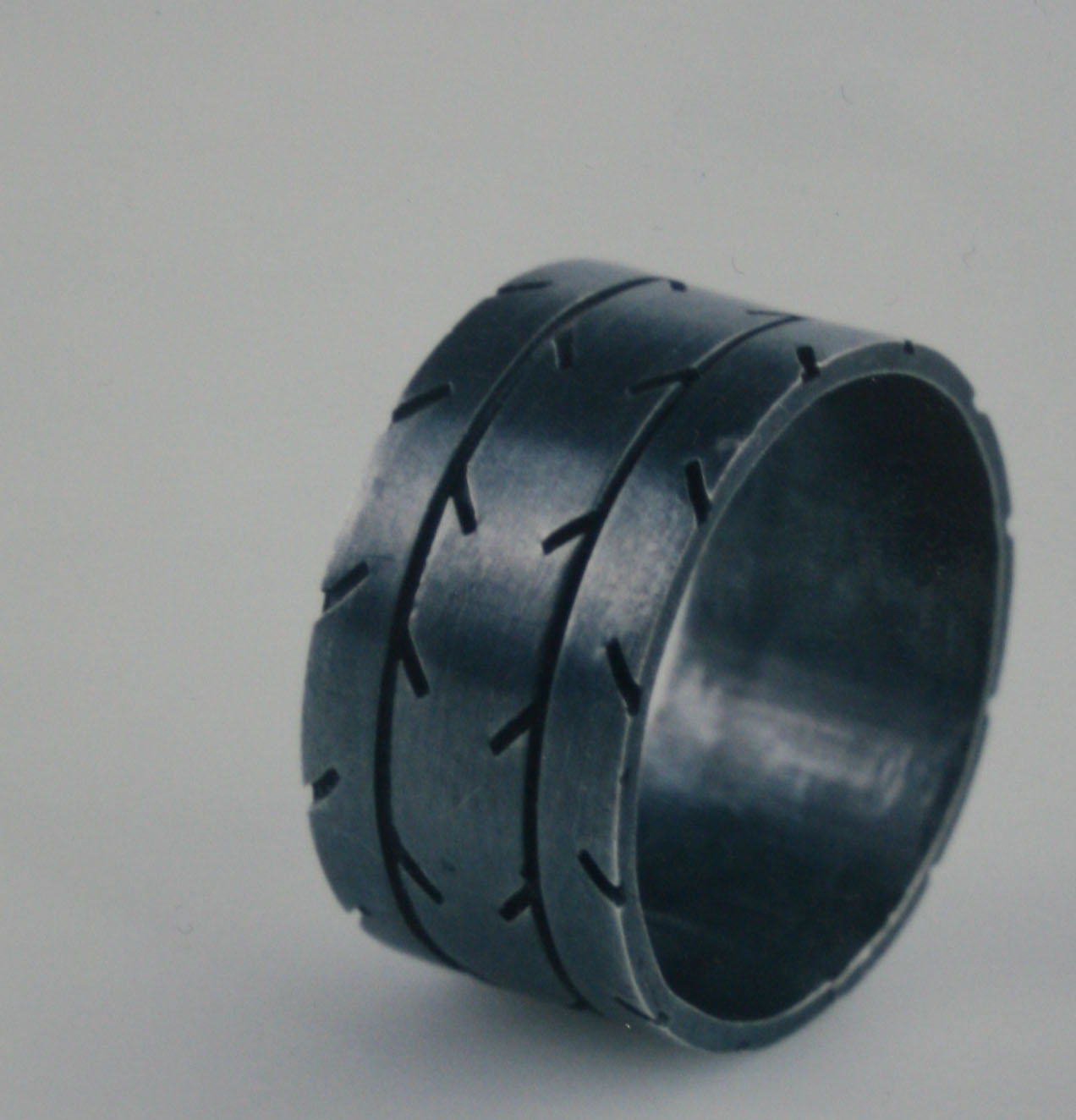 Tiring is simply a tire/tyre for your finger. Made from sterling silver with a blackened finish.

v.tr.
1. To diminish the strength or energy of; fatigue.
2. To exhaust the interest or patience of; bore.

n.
1. A covering for a wheel, usually made of rubber reinforced with cords of nylon, fiberglass, or other material and filled with compressed air.
2. A hoop of metal or rubber fitted around a wheel.

To adorn or attire. 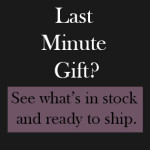 I'm still shipping orders - now from my home and not my studio. Many items are in stock and ready to go. UK orders will still despatch regularly, international orders will despatch once per week when I visit the post office. Stay safe! ~ Emily Dismiss